Funding or Fumbling Health IT 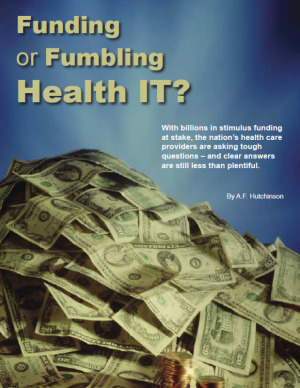 With billions in
stimulus funding at
stake, the nation's
health care providers
are asking tough
questions - and clear
answers are still
less than plentiful.
This report originally appeared in the March 2010 issue of DOTmed Business News

Last February, President Obama signed the American Recovery and Reinvestment Act of 2009, setting aside $36 billion in stimulus funds to advance the nation's health care IT systems through the widespread adoption of electronic health record (EHR) systems. Designed to propel the American health care industry into the digital age, the government estimates that the move from paper to electronic record-keeping proposed in the HITECH Act will save $12 billion in spending over a decade.

An interim final regulation (IFR) developed by the Office of the National Coordinator for Health Information Technology (ONC) and published in the Federal Register on January 13, 2010 specifies an initial set of standards and implementation specifications for EHR technology. The Centers for Medicare and Medicaid Services (CMS) outlines meaningful use of the technology and the incentives that Medicare and Medicaid providers who meet eligibility criteria will receive. As we went to press, the ONC has yet to release a third regulation that lays out the process for product certification, and there's no official word of when that rule will be set, or what it will entail.

The 60-day comment period for the meaningful use definition and the CMS criteria is open until mid-March, and CIOs, providers and industry groups are busy outlining their concerns about the proposed rules - with good reason.

According to CMS, the proposed rule would define meaningful use as one who uses "certified EHR technology in a manner that improves quality, safety, and efficiency of health care delivery, reduces health care disparities, engages patients and families, improves care coordination, improves population and public health, and ensures adequate privacy and security protections for personal health information."

The American Hospital Association's V.P. of Policy, Don May, is one of the many execs working to understand exactly how much money is in play, how much will actually be distributed, and when that distribution will occur. "The CBO originally estimated $34 billion in incentive payments with Medicare and Medicaid. CMS estimates were between $14 billion as a low estimate and $28 billion as their high estimates. I think we'll be lucky to hit $14 billion because of the way they built this regulation," May told DOTmed Business News.

"I believe they said that 30 to 45 percent of their money that is eligible to be given to hospitals in 2011 would be given, but I think those numbers are dramatically off." Based on his discussions with hospitals, May estimates the actual percentage of funding hitting in 2011 may be less than 3 percent. "The majority of hospitals I talked to are not even shooting for 2011. They're shooting for 2013, which is still a problem. I think Congress thought that there would be some hospitals that are already meaningful users today."
1(current)
2
3
4
5
6