The Smell of Green

The Smell of Green 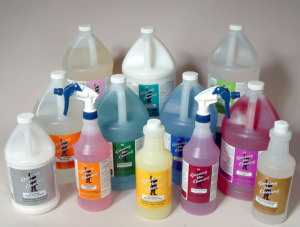 Greening the Cleaning's
line-up of institutional
cleaning products covers
every area of
a health care
facility.
This report originally appeared in the April 2010 issue of DOTmed Business News

For hundreds, maybe even thousands of years, humans relied on things found in nature to attend to various ailments. In the last hundred years, there has been a strong shift from nature as cures and treatments were created with chemical compounds in labs. But as is often the case, the pendulum is swinging the other way, or maybe it's ready to settle closer to middle as nature is beginning to turn up more in hospitals and health care settings. DOTmed took some time to check-in with environmental advocate Deirdre Imus to see where things sit a year since our last interview. Imus offered a little background of the catalyst behind the decision for her to throw her hat into the green arena and then updated us on new developments in the field.

"My big question was, 'Are hospitals' physical environments a place of healing?' and to me they should be, but the answer I quickly found was, 'No.' In fact, they're often places that when you're sick, you can potentially become sicker because of all the toxic cleaning and the pest control agents that are used, bad air and germs - all these things. Even that hospital smell that people talk about," said Imus.

Deirdre, who is married to radio personality Don Imus, first began wondering about that smell in 1998, when she and her husband co-founded the Imus Cattle Ranch for Kids With Cancer, which seeks to help heal its young patients using the cowboy work ethic in an environmentally friendly environment.

As she continued her research for the ranch, Deirdre realized that many of the chemicals commonly used to clean the hospitals where she met these children were carcinogens. To her, it simply made no sense to expose people with cancer to chemicals known to cause cancer.

So, in 2000, Mrs. Imus met with former Hackensack University Medical Center president John Ferguson with the hopes that the information she'd gathered would help convince him to start "greening the cleaning" in the nation's fourth-largest hospital.

Less than a year later, the "Greening the Cleaning" program was launched at HUMC. Deirdre sees that moment in Spring 2001 as a game-changer.

"If you can have an impact in a hospital like this and make that kind of change, that's huge!" she said.

With the success of the Greening the Cleaning program, Deirdre founded The Deirdre Imus Environmental Center for Pediatric Oncology® at HUMC, a 501c3 not-for-profit. It's one of the first hospital-based programs designed to identify, control and ultimately prevent exposures to environmental factors that may cause adult, and especially pediatric cancer, as well as other health problems with children.
1(current)
2
3
4
5
6