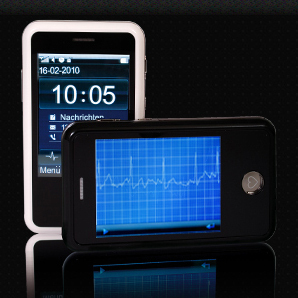 Truly mobile ECG
Patients afraid their heart rhythm has gone awry can soon check up on their health using their cell phone.

An iPhone-like mobile phone that takes electrocardiogram readings and relays them to a doctor or hospital will launch in Europe later this year. But if it comes to America, its success might depend on reimbursement for health care delivery, according to a cardiologist group.

The phone, called the H'andy sana 210, features a 2.8-inch touch screen, camera and the other usual cell phone features. But it can also take ECG readings. To work it, patients press two fingers against the edge of the phone for 30 seconds, according to the inventor's website. The phone then packs off the reading to a designated doctor in an xml file.

"Instead of the local doctor taking information when you come to the surgery or you come to the outpatient clinic, it's collecting that information remotely directly to their desktop," Jonathan Viney, head of Medical Marketing UK Ltd., which is releasing the device, told DOTmed News.

MMUK is selling the product in the UK on behalf of Medical Marketing Berlin GmbH, the German developers of the phone, the company said. Viney, a former sales executive with Vodafone UK, also serves as a consultant for MMB.

The phone, which Viney said is carrier-agnostic, will cost between 400 and 500 pounds, or around $625 to $780, although with subsidized plans it could be cheaper for the consumer.

He said his company is starting to talk with the National Health Service in the UK about possible support for the device. Viney thinks it could help reduce costs, perhaps by getting patients to send ECG readings remotely, rather than having to book an appointment with a clinic or hospital.

"What we're expecting is the private medical marketplace to react quickly, show the cost savings, the improved benefits," he said.

Another advantage could be boosting compliance, as patients always have their phones handy.

"People will go out in the evenings, forget their wallet and purse and be happy to borrow money off people, but they won't forget their phone," he said.

Viney said if there's market demand, he would consider releasing the phone in the United States. First, the company would have to build in the capability to operate on U.S. cell phone frequencies, which would take three to six months, he said; the device would also need U.S. regulatory approval.

But it’s not clear the device or others like it could take off here, even if it could be sold, unless changes are made to the way health care is delivered.

“Certainly, this is the future, and so this is one of several devices that are starting to show up on the market,” said Dr. Alfred Bove, immediate past president of the American College of Cardiology and professor emeritus of medicine at Temple University School of Medicine in Philadelphia, Pa. “But the big problem is we don’t get paid for it.”

Dr. Bove has been running projects using smart phones and Web-based tools to help patients manage diabetes, blood pressure and heart failure. Although he said his research has shown risk reduction and even cuts in readmission rates from using his programs, he says doctors he shares his findings with are often reluctant to accept the products because they would reduce office visits – the way doctors get paid.

“The incentives for doing this kind of stuff are misaligned because of the payment system,” he said.

But Bove said patient-centered medical homes and accountable care organizations could change all that by tweaking incentives. The health reform legislation passed this spring requires the Centers for Medicare and Medicaid Services to launch a voluntary accountable care organization program by 2012. And there are already a handful of pilot medical homes running nationwide.