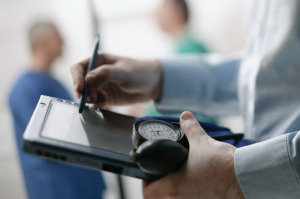 Although the Centers for Medicare and Medicaid Services incentive program for electronic health records is set to begin next year, new research from the Harvard School of Public Health shows many of the nation's hospitals are not ready.

In fact, the research, published Thursday in Health Affairs, found that EHR adoption increased from 8.7 percent in 2008 to just 11.9 percent in 2009. And only 2 percent of hospitals met the controversial federal meaningful use criteria, required to receive government-backed incentives.

The researchers also found that smaller, rural and public hospitals were further behind larger, private and urban hospitals in EHR adoption. This will further widen the gap between the two groups in receiving the reported benefits of health information technology.

"Getting hospitals to start using EHRs is critical," said Jha in a news statement. "There is overwhelming evidence that EHRs can help, yet the expense and the disruption that implementing these systems can cause has forced many hospitals to move slowly."

As part of the American Recovery and Reinvestment Act, the government will provide financial incentives to hospitals that become meaningful users - by meeting more than a dozen requirements - of EHR programs. There has been controversy over whether the requirements and the deadline to meet them are reasonable.

While Jha likes the criteria and thinks they will improve care, he said the timeline is problematic and doesn't anticipate the majority of hospitals will adopt EHR systems within the next five years.

"There is little doubt in mind that in 10 to 15 years from now, mostly all of hospitals will be be here," he told DOTmed News. "The issue is really what's going to happen in the next five years. In that timeline, it's a big challenge for most hospitals to fully adopt and use EHRs."

But the researchers also found that the critical access, small- and medium-size, public, non-teaching and rural hospitals were less likely to have adopted even a basic EHR program in the 12 months prior to the survey.
1(current)
2