While others struggle, Queens hospital finds way to expand 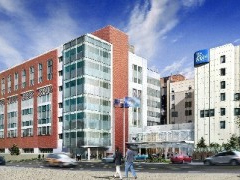 The project, which took about 40 months to complete, was started long before the economy took a toll on health care facilities.

"Had we started the project today, we never would have been able to do it," the hospital's CEO, Stephen Mills, told DOTmed News. "We were fortunate in terms of timing."

While the project was underway, the Flushing-based hospital saw several hospitals close due to financial hardships, including Mary Immaculate Hospital and St. John's Queens Hospital in February 2009, both located in Queens. Earlier this year, St. Vincent's Hospital in Manhattan and Harlem's North General Hospital filed for bankruptcy.

The city's West Village is still reeling from the closure of St. Vincent's, which closed its doors $700 million in debt. While North General Hospital closed, its clinics were handed over to the Institute for Family Health, which has caused heads to butt over union representation.

"This is a time of extraordinary challenge for every hospital in the country," Mills said in a statement this past summer.

Money for the New York Queens Hospital project came primarily from the U.S. Department of Housing and Urban Development. Thanks to the HUD mortgage insurance program, the hospital didn't really have to limit the scope of the project. In the end, it now is able to provide more for the community that lost two hospitals in the past two years.

As a result of the recent hospital closings in the New York City area, New York Hospital Queens has seen a greater influx of patients to its emergency department. As for sick patients who need to be admitted to hospitals, Mills said he believes they're receiving the care they need.

"I think it's been seen clearly that anyone who really needs hospitalization will get it, in spite of the fact that the institutions closed," he said. "We have seen a tremendous influx of patients seeking urgent care. We haven't been deluged with in-patient admission, and I think that's the case around the city."

What's in the West Wing

The hospital in Queens now boasts an extra 80 beds, bringing the total to 519. The ground floor includes a new ambulatory center with 10 new operating rooms and 33 recovery beds.

"If you have to be in the hospital, this is really the place to be," Mills said.

Check out in-depth coverage on hospital bankruptcy in the October issue of DOTmed Business News.