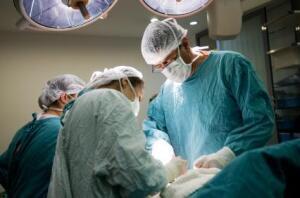 Communication to prevent
error is key.
Despite nationwide efforts to prevent wrong-site and wrong-patient surgical and procedure errors, a new study published Monday in the Archives of Surgery reveals that those events still take place in hospitals across the country.

In an effort to avoid surgical and procedural errors, The Joint Commission introduced a universal protocol for all accredited hospitals, ambulatory care facilities and office-based surgical facilities in 2004. The protocol comprises a pre-procedure verification, a surgical site marking and a "time-out" performed immediately before the surgical procedure. A time-out is the last chance for the surgery team to make sure it has the right patient and knows the correct procedure.

"Wrong-site surgery continues to pose a significant challenge to patient safety in the United States," the authors, led by Dr. Philip Stahel, wrote.

Stahel, of Denver Health Medical Center and University of Colorado School of Medicine at Denver, and his team of researchers analyzed data from a company that provides professional liability coverage to 6,000 practicing physicians in Colorado. Clinicians receive incentives for early reporting of adverse incidents and assistance for disclosure and resolution with patients and their families, according to the paper.

"I was shocked by the findings, to be honest," Stahel told DOTmed News. "We assumed the implementation of the universal protocol in 2004 would protect us from these so-called 'never events' to ever occur again, yet we noticed with the data we are currently publishing that there was an increase in occurrence of wrong-site surgeries and wrong-patient procedures after the implementation of the universal protocol."

"We identified the root cause in most wrong-patient procedures is not [that] the surgeon elected the wrong patient, but it is [due to] a mix-up of biopsy samples in the lab," said Stahel. "My conclusion from that is to advocate [expanding] the protocol to non-procedure specialties, including pathology."

Conducting a surgery on the wrong patient or at the wrong site can be more harmful than one may think. According to the researchers, the patient who died needed a chest tube. It was inserted in the wrong lung, which caused the good lung to collapse, and because the sick lung was not treated, the patient died immediately, Stahel explained.

"We saw several patients who had wrong organs removed in the wrong patients just based on wrong diagnosis and identity mix-up," he said. "That's a terrible and certainly preventable complication."