The next level for ultrasound diagnostics: Shear Wave Elastography

The next level for ultrasound diagnostics: Shear Wave Elastography 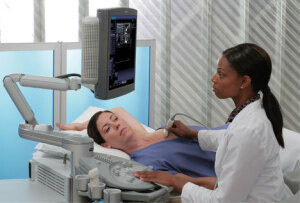 Significant additional information to the ultrasound diagnostic process is being added through a new multi-wave ultrasound technology. This technology is being used to provide not only informative morphological B-mode images but also true tissue elasticity information, through a complementary imaging tool known as shear wave

Tissue stiffness results add a crucial piece of information to the diagnostic evaluation as tissue elasticity relates to pathology. Today this technology is being used in the identification and classification of breast lesions, as well as in the thyroid, liver, kidneys and prostate.

Shear wave elastography versus strain elastography
Strain Elastography is used in conventional ultrasound elastography scanning. With this technique, a compression force (called stress) is used on a tissue and the degree to which the region distorts (known as strain) is assessed. In most cases, the transducer itself, compressing the tissue and moving it by a few millimeters can apply stress.

A number of methods are employed to track the movement of the tissue either by comparing single ultrasound lines (A-mode tracking) or by comparing the B-mode images before and after compression or continuously during repeated compression movements. Real-time elastography can be performed in two dimensions so that side-slip can be measured, as long as it remains within the scanned plane, which can be difficult to achieve.