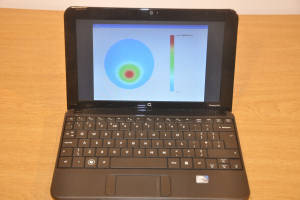 The device, created by Zhipeng Wu of the university's School of Electrical and Electronic Engineering, can show real-time video images, which would clearly and simply show the presence of a tumor - malignant or benign - according to the report.

Tested and studied in the United States, Canada and the United Kingdom - the radio frequency or microwave technology - is fast and less intrusive than traditional modes of breast screening. These features make it possible to test women at GP surgeries, reducing wait times and in some cases, avoiding unnecessary X-ray mammography. The researchers also propose using the portable scanner at home for continuous monitoring of breast health.

The real-time radio frequency uses computer tomography and works by the same technology as a cell phone, but with a fraction of its power, according to the report. The technology is low-cost and can fit into a lunchbox-sized case for easy portability.

If a tumor or other abnormality is present, it will show up on the screen as the sensor detects the difference in tissue contrasts via radio frequencies. Malignant tissues have a higher permittivity, ability to store electrical potential energy under the influence of an electric field, and conductivity, thus they appear differently than normal ones.

Breast cancer screening and diagnosis is usually done through mammography, which is most effective in women ages 50 and older, although most guidelines recommend women start screening annually at age 40. Mammography in women ages 50 and older can give results of up to 95 percent accuracy, the Manchester report said. But mammography's effectiveness decreases in younger women - women under 50 - largely because younger women have denser breasts.

Detection rate from mammography in younger women could be as low as 60 percent, which accounts for 20 percent of all breast cancer cases, the report said.

"The real-time imaging minimizes the chance of missing a breast tumor during scanning," said Wu in prepared remarks. "Although there is still research to be done, the system has great potential to bring a new way for breast cancer diagnosis."

Wu submitted the portable scanner to the IET Innovation Awards. The winners will be announced next month.