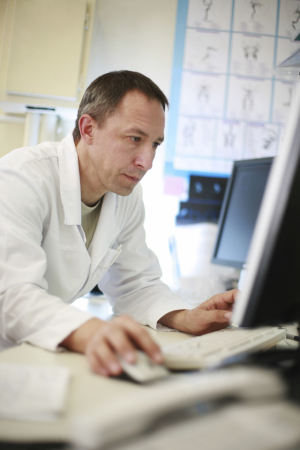 It’s a late January afternoon and Dr. Sam Friedman, a radiologist with Pitts Radiology, is sitting in front of four separate computers and 10 different monitors in his reading room. Even in a relatively small town like Columbia, S.C., where Friedman practices, patients tend to bounce between imaging providers, requiring radiologists to use a number of systems to compare studies from different facilities.

To look at two studies a patient received through two separate providers, Friedman has to bring up the studies one by one. The process can be problematic. “At best, it slows you down,” he says. “At worst, because I’m looking at one study on one computer and another study on another computer, you miss things — I know I have and my partners have. It’s not optimal for patient care.”

Since radiology’s transition from paper to digital, picture archiving and communication systems have been considered both a blessing and a curse. PACS have proven their ability to cut costs, save time and enhance efficiency, but the lack of interoperability between different systems poses a challenge, especially as health information exchange moves to center stage.

The latest PACS and add-ons enable radiologists to customize workflows, and some vendors have already introduced solutions to iron out some communication and integration issues. And yet, the radiology community is still looking for all PACS to get along. “It would be nice if the machines did talk, if the architecture of the machinery and the political climate would allow for transmission back and forth of everybody’s studies,” Friedman says.

Sharing images
With more than a million studies performed on an annual basis across its health system, radiologists at the Detroit, Mich. Henry Ford Hospital have their work cut out for them.

The hospital has been using Philips Healthcare’s iSite Radiology since 2003, with several upgrades along the way. “Our radiologists like iSite’s simplistic interface — there aren’t too many buttons, it delivers images very well and it’s easy to navigate,” says Dr. Safwan Halabi, director of imaging informatics with the hospital. “We also enjoy the ability to add plug-ins, either third-party software like Poiesis [Informatics] or things that we create internally with our IT group in radiology.”

Henry Ford’s radiology department assigns certain studies to radiologists with the help of specific filters and has evolved to triaging cases. In addition to inpatient studies that require fast turnaround times, radiologists also triage studies in the emergency department. For instance, a scan of a trauma patient takes precedence over someone with a less serious problem, says Halabi.
1(current)
2
3
4
5