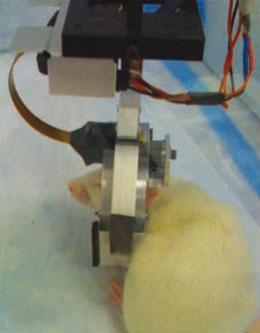 Scientists have developed a miniature portable positron emission tomography scanner that could expand the use of PET technology in behavioral research.

In the past, PET scans have been limited in this field because scientists have had to anesthetize animals to get them to lie still long enough for an exam. But physicists with the Brookhaven National Laboratory in Upton, N.Y. have developed a wearable PET scanner small enough to loop around a rat's head.

The Rat Conscious Animal PET, or RatCAP, is a doughnut-shaped device with an inner diameter of about one and a half inches, and which weighs about half a pound, according to the researchers. That's still too big for the rat to carry: so the researchers have hooked up the scanner to a mobility system mounted to the top of the observation chamber. This gives the rat some freedom of movement, the researchers said.

The scientists hope the device could allow experiments to better understand how neurotransmitters work by tracking their activity with different radiotracers -- substances injected in the animal which bind to brain chemicals and shed gamma rays visible on the PET scans.

For the initial study with the device, published online and ahead of print in Nature Methods this week, the researchers measured dopamine levels in the rat's brain, comparing scans taken by awake animals with the RatCAP to knocked-out critters with conventional animal PET scanners. The scientists used the tracer (11)C-raclopride, which binds to dopamine receptors in the brain.

Already, the researchers said they found something new: awake animals had less dopamine activity than the anesthetized animals, even though behavioral activity is generally associated with higher dopamine levels. The scientists speculate this could be due to effects anesthesia has on metabolism of the radiotracer.

“Our method provides data which may challenge traditional paradigms and ultimately improve our understanding of the dopamine system," said lead author Daniela Schulz, a Brookhaven behavioral neuroscientist, in a statement.