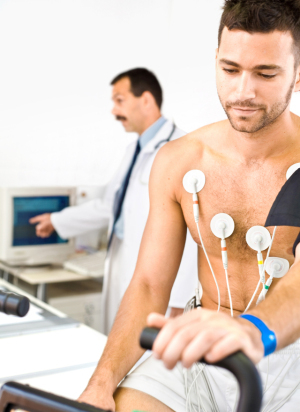 From the June 2011 issue of HealthCare Business News magazine

Leonard’s teammates picked him up and carried him through the gym. Just moments into the celebration, the teen collapsed.

Hours after being rushed to a local hospital, he was pronounced dead. Leonard suffered a cardiac arrest due to dilated cardiomyopathy -- an enlarged heart.

The Fennville Blackhawks are far from alone in losing a teammate and a friend to sudden death. And when a young athlete dies during a sporting event, the tragedy makes headlines nationwide.

“The whole issue of athletes and sudden death is emotionally charged,” says Dr. Douglas P. Zipes, a distinguished professor emeritus of medicine with the Indiana University School of Medicine. “You have a youngster who is supposed to represent the epitome of health, and all of the sudden, he’s essentially struck by lightning.”

Both parents and medical professionals share a common aim to reduce and ideally prevent sudden deaths in student athletes.

But when it comes to formulating a strategy to achieve that goal, opinion and practice diverge, with rifts even within the cardiology community.

The heart of the issue
There are plenty of estimates but little concrete data regarding deaths among student athletes.

Some researchers say the rate is as low as one in 300,000 youngsters. Others estimate that it’s less than 100 students a year from among the 10 to 12 million participants. And a study published in the journal Circulation this year found the rate of sudden cardiac death among National Collegiate Athletic Association student athletes is one for every 43,770.

But no national and systematic registry exists for sudden death cases in youth and many studies gather their estimates from published news articles about the incidents.

“Various reports carry different numbers -- everything from a few hundred a year to 14,000 a year,” says Michele Snyder, executive director of Parent Heart Watch, an organization that advocates for thorough cardiac screening in youth. “And we truly don’t know.”

Many medical professionals agree. Dr. Stephen Daniels, the pediatrician-in-chief at The Children’s Hospital in Aurora, Colo., and a spokesman for the American Heart Association, says while sudden death is not a minor issue, it’s also not a very common occurrence. “But we don’t have national registries or ways of combining data across jurisdictions in a way that we really have a firm handle on what that number is,” he says.
1(current)
2
3
4
5