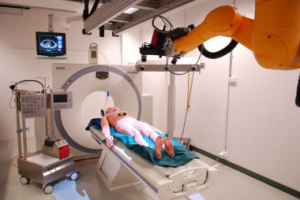 The Radiological Society of North America’s annual tradeshow is the world’s biggest radiologist convention and one of the largest medical conferences around. But it’s not the sort of place you’d expect to see autopsy photos.

Yet, last year, attendees saw images from an autopsy – at least, a virtual one.

On the show floor, the Swedish diagnostic imaging company Sectra was demonstrating its “virtual autopsy” table – a touch-screen display hooked up to a PACS system. About the size of a small pool table, it’s what one might expect to see on an episode of CSI.

At the show, the table’s screen showed images of a rather flabby, middle-aged man, who was apparently stabbed to death in his apartment. After he was found, the medical examiner put him through a CT scanner, creating a three-dimensional X-ray portrait of his corpse.

With the CT reconstruction of the body, doctors could then examine the cadaver inside and out.

First, they could look at the skin surface, and see the small, straw-hole gashes left by the knife. Peeling away the skin and viscera, they could examine the ribs smashed by the force of the attack. And they could also find something not revealed during a normal autopsy: the pockets of air trapped inside body, formed where the flesh closed around the blade.

Although the table is brand-new, virtual autopsies, technically, are not. CT scans on corpses have been going on since at least the 1990s.

But only in the last decade has a formal process arisen for managing caseloads. The leader in this field, a Swiss group, calls that process “virtopsy.”

“We’re not the first to perform CT scans on a dead body,” Dr. Lars Ebert, a computer scientist with the Virtopsy group, based out of the University of Zurich, told DOTmed News. “But we’re the first to generate a workflow for it, and to implement it as a standard procedure, and make a scientific approach with bigger numbers of cases.”

Autopsies go virtual
The roots of the Virtopsy project stretch back to 2000.

Around that time, researchers made a surface scan of a child run over by a car, to match the impressions on the skin with tire tracks from the vehicle. This was among a handful of cases that prompted the researchers to wonder if the process could move from an occasional, one-off tool to a “black box system” for routine autopsies.

“You put in body on one side, it comes out other side, and the system gives you an idea about the injuries and documents everything,” Ebert said.

Virtopsy, in essence, was born. By 2006, the team, then based in Bern, got its own CT scanner. Later, the researchers also picked up a surface scanner and a 1.5-T MRI unit. By the time they moved to Zurich, they had been running around 300-400 cases a year (and they also upgraded to a 3T MRI). In Zurich, they expect to do slightly more – though not, perhaps, much more.
1(current)
2
3
4
5
6