With debt deal done, could Medicare cuts be in the cards?

With debt deal done, could Medicare cuts be in the cards? 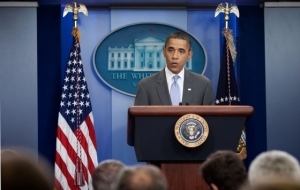 It also tasks a 12-member congressional committee with coming up with over a trillion dollars in further cuts. And some medical societies worry these could come from health care.

"America's hospitals find it difficult to support a debt ceiling proposal that could negatively affect Medicare for our nation's seniors," said Rich Umbdenstock, president and CEO of the American Hospital Association, in a statement.

The bill, following broadly the outline reached Sunday between Democrats and Republicans, aims to raise the debt limit by over $2 trillion while also cutting federal spending. The two-part plan lets President Obama raise the debt ceiling by $900 billion (part now, part in September), in exchange for a similar cut in spending over the next decade.

To raise the ceiling further, though, $1.5 trillion in savings will be have to be found and approved by Congress by Christmas. Tasked with drumming up these savings is a bipartisan, bicameral committee of 12.

But if Congress fails to find the savings or a balanced budget amendment isn't passed, the law triggers an automatic, across-the-board $1.2 trillion spending cut, including up to 2 percent in cuts to Medicare reimbursements to providers from 2013-2021. But the hope is that the cuts -- half of which are to defense spending -- will be so toxic to both parties that they'll hammer out a deal in time.

But the problem, observers note, is that at the end of the year, the push will also be on for Congress to raise the funds necessary to forestall the long-delayed, 29.5 percent sustainable growth rate cuts to Medicare physician payments, which are set to hit again in January.

Also, medical societies ultimately fear, the 12-member committee could see health care as an attractive target for cuts. In a release Tuesday, the American College of Radiology warned that the committee will "undoubtedly" look to fiddle with reimbursements.

"Cuts to imaging will likely be part of a larger package of physician reimbursement reductions," the group said on its website. "ACR will continue to educate lawmakers as to why further cuts to imaging are unnecessary and will adversely impact patient care."