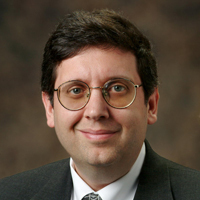 Dr. Benjamin Movsas, lead author
for the study and chairman
of radiation oncology at
Henry Ford Hospital in Detroit
A new study has debunked the widespread theory that older cancer patients are not competent, comfortable or equipped to use Web-based technology.

Due to be presented at the 53rd Annual Meeting of the American Society for Radiation Oncology in Miami on Oct. 5, the study found that the majority of older patients preferred using a computer to a pen or pencil when filling out a questionnaire. The 49 patients were, on average, 64-years-old.

"[Elderly people] enjoy the Internet; it's very easy for them and acceptable; and when given the choice, they would much prefer to use a Web-based strategy," said Dr. Benjamin Movsas, lead author for the study and chairman of radiation oncology at Henry Ford Hospital in Detroit, at a news briefing.

The prospective study, which is part of a larger Radiation Therapy Oncology Group (RTOG) randomized trial for early-stage prostate cancer patients, aimed to increase participation in a quality-of-life survey.

Findings showed that doctors currently do not receive consistent quality-of-life data through the use of paper questionnaires. At the end of treatment, only 52 percent of patients completed paper surveys six months after the study. "Institutional error" was the most common cause of noncompliance.

After using a HIPAA-secure, Web-based system called VisionTree Optimal Care, accessible from any computer and offering e-mail reminders to patients, researchers found that the survey compliance increased from 52 to 90 percent. The study ran from Sept. 2008 to Dec. 2009.

Going forward, Web-based technology will be used in studies for alternative cancers, so that quality of life can be better-understood and improved for future cancer patients.