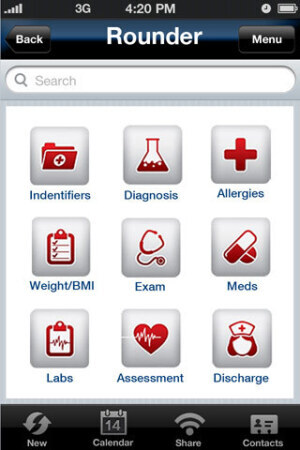 What the Rounder
app could look
like (Credit: AMA)
A mobile app that lets doctors keep track of patients during their rounds and a program that tests medical students' diagnostic acumen both took home top prizes in the American Medical Association's first ever app challenge.

Dr. Cynthia L. Beamer, a pediatrician in Texas, won in the physician category with her Rounder app, which immediately calls up a patient's important clinical information (weight, allergies, medications) for doctors on their rounds. Michael Ray Bykhovsky, a third-year medical student at Georgia Health Science University in Augusta, Georgia, won in the resident/student category for his JAMA Clinical Challenge app, which presents a clinical scenario and requires users to guess the right diagnosis.

The winners will each receive a $1,500 Apple Store gift card and a $1,000 American Express card, as well as a trip for two to the awards ceremony at AMA's interim house of delegates meeting in New Orleans, which begins Nov. 12.

AMA's chair-elect Steven J. Stack said Beamer and Bykhovsky beat out hundreds of other applicants to be chosen by AMA members as the "next great medical app ideas." The 10 finalists in the challenge were announced in early September, and voting ended Sept. 30.

"Apps are among the many ways physicians and future physicians learn, stay connected and juggle busy schedules, and we congratulate Dr. Beamer and Mr. Bykhovsky for their innovative and winning ideas," Stack said in a statement.

In September, the AMA said they had, at least tentatively, planned to create and publish the winning apps.