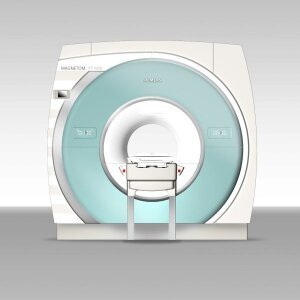 Siemens' 7T MRI system
As new applications for cardiac imaging emerge, an industry scientist says clinical 7T MRI might one day come into its own.

German scientists have developed new techniques for capturing a heart beat with an ultra-high field MRI whose power is thousands of times stronger than the Earth's magnetic field.

Currently, all clinical work is done with 1.5T or 3T MRI units. But scientists are exploring how to scan the heart with a powerful and expensive, experimental 7-Tesla MRI machine.

To do so, the scientists had to invent new radiofrequency coils to capture images from the body and other technology to get around the difficulty of synchronizing the scan with the heart's motion.

Although the scientists involved in the project caution that the technology is still in its early stages, they hope the results also show the possible clinical potential of 7T, which right now is up for debate.

"7T is like 3T 10 years ago," James Meng, R&D director of MR at Siemens Healthcare, which is involved in the MRI heart studies, told DOTmed News. "If you talked about 3T 10 years ago, no one would believe it would become the clinical instrument it is today."

For now, these investigational devices -- none has been cleared by the Food and Drug Administration for clinical use -- are quite rare.

The units are scarce, in part, because they're expensive. The rule of thumb for MRIs is that adding 1 Tesla to the instrument adds another $1 million to the price tag. However, this has been disputed, and manufacturers generally do not comment on price.

The modality has also not advanced as fast as was previously forecast. In 2006, a Philips executive predicted that by 2009, the 7T market would see $700 million in accumulated sales, or 100 systems sold, according to a Diagnostic Imaging report. "I think that that has not happened up until now," Ken White, Philips' MR program manager, told DOTmed News. "But the potential is certainly there in the future."

The potential comes from a host of fields where 7T MRI might help doctors learn more information than they can with scanners currently available in hospitals and imaging centers.
1(current)
2
3