C-arms: On the cusp of change

C-arms: On the cusp of change 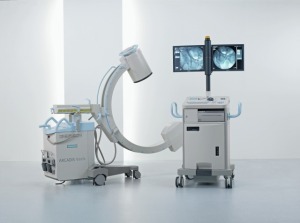 “Sedate” was the word used to describe the mobile C-arm equipment market’s growth patterns in a report published by research firm Global Industry Analysts, Inc. this past November. Emerging alternatives in radiography and
the mature market are the main components preventing growth, with most of the demand coming from replacement sales to existing clients. Major players include GE Healthcare, Philips Healthcare, Siemens Medical Solutions and Ziehm Imaging GmbH.

In developed markets like the U.S. and Western Europe, business has been fairly steady, with the U.S. representing the largest market worldwide. Meanwhile, in the emerging markets of China, Brazil, Russia and the Middle East, business has been strongly up over the past year and is becoming more aligned with developed markets, according to Joe Shrawder, president and CEO of GE Healthcare Surgery.

“Some emerging countries are adopting newer technology later because their economic growth cycle and maturity is coming later,” he says. “Minimally invasive surgery is becoming much more common in emerging countries.”

“A shift from traditional open surgery to minimally invasive surgery often requires the use of visualization or imaging where the surgeon cannot see with direct line of sight,” says Shrawder. “The developing world’s [surgical teams are] becoming better at it and more aware of it and more conscious about providing patients with the best available surgical techniques.”

The evolution of new application areas, including the ability to image the body’s torso and head — as opposed to only extremities — is another segment that will help the C-arm industry to boom. Ultimately, demographic trends toward a heavier, aging population will drive procedure growth, according to Mark Manum, director of marketing for Philips Healthcare’s OR channel.

“The population in general is getting older and the U.S. is getting heavier; those two factors coincide with some health issues that mobile C-arms are used for, including image guidance during spine surgery, orthopedic trauma surgery, joint replacements and vascular surgery,” says Manum.
1(current)
2
3
4
5
6
7