Phil speaks with Bastian Berkel about the European market 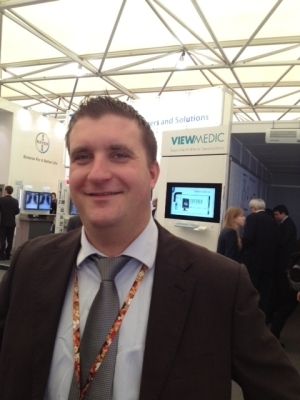 Bastian Berkel at ECR
Not long ago, I was in Germany visiting Tomovation GmbH in the small northwestern city of Castrop-Rauxel. Bastian Berkel, Tomovation's sales manager, was kind enough to pick me up at the airport and drive me to his office.

During our car ride, I was amazed at how many people called Bastian, and how many different languages they spoke.

Although Bastian seems relaxed and casual on the outside, he takes his business very seriously. His job is to work together with Alliance Medical, the parent company of Tomovation, and remarket equipment for them. For example, if Alliance provides an interim mobile service for a hospital, Tomovation might take up the hospital's old equipment, and it's Bastian's duty to resell it.

In many ways, Bastian's one of the most knowledgeable businessmen in our field in Europe because he's involved in so many types of transactions.

Recently, I caught up with Bastian again at the European College of Radiology's meeting in Vienna, which is where I took the picture of him you see on this page. When I met with him, I made sure to ask him for his thoughts about the European market.

Intriguingly, Bastian seemed optimistic because of the rising number of inquiries he's fielding. I asked him whether the inquiries were predominantly for high-end or low-end equipment, and he surprised me by saying there was growth across the board.

I also asked what sort of impact the financial crisis in Europe was having on the market, but he said while he's generally noticing some effects, it's not having the sort of impact on health care we might expect from observing the crisis unfold in the United States.

And when I asked whether he thought the dollar would gain on the euro, he told me, "I wouldn't be going out buying dollars any time soon."