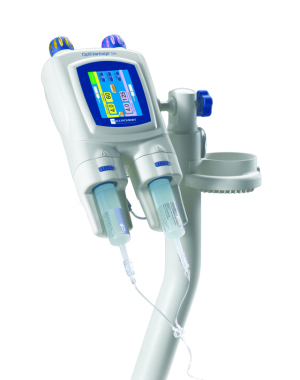 The imaging agents segment has evolved from the simple use of barium sulfate slurry to cutting-edge monoclonal antibodies to identify tumor markers. And it is forecast to flourish significantly in the near-future, according to research firm Global Industry Analysts, Inc.’s report, “Imaging Agents: a Global Strategic Business Report,” published in February. The segment’s growth is largely due to the increased need for diagnosis and management of prevalent age-related health issues such as cardiovascular disease, cancer and neurological disease. As boomers move past middle age, the need will continue to grow.

Change has also been afoot in the industry. Just last month, Bayer HealthCare folded its contrast agent injector and service subsidiary Medrad into a newly created Radiology and Interventional unit, combining Medrad with Bayer’s contrast media business. Although the businesses have been integrated, the products will retain Medrad’s name.

“It was pretty big that Bayer brought Medrad into their new business unit,” says Chuck Marshall, president and CEO of Florida Service Plus Inc. “This was probably the biggest corporate action taken in the past year.”

At present, the top injector OEMs in the U.S. include Covidien, Medrad and E-Z-EM. But in recent years, there have been a small number of injector manufacturers from Europe and Japan seeking FDA approval for sale in the U.S. As hospitals continue to seek ways to cut costs, there may be an opportunity for these new manufactures to offer a quality product at a low cost, says Ryan Clarke, president and owner of Injector Support & Service LLC, based in Orlando, Fla.

Are new technologies making contrast agents redundant?
New technologies are emerging, which in some cases, may make contrast agents unnecessary for certain procedures. Imaging has also improved so much that providers can now use a smaller volume of contrast materials and still get clear results — good for patients, not so much for the manufacturers.
1(current)
2
3
4
5
6
7