I win my bet with Bill King 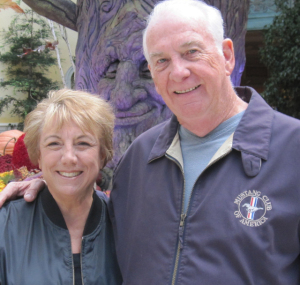 Bill and Nancy King
Bill is one of my oldest friends in the business. He was the first guy to recommend that I attend RSNA in 1980. At the time, he was president of LINC Equipment Services and we worked together to license the sale of GE 8800 CT scanners in China.

Bill was a real innovator and worked for Marty Zimmerman, the founder of the LINC Group.

Those of you who know Bill know that he left Link to start his own company, King Equipment Services, to refurbish medical trailers, a business which he eventually sold to his son, Todd.

After selling to Todd, Bill and his wife, Nancy, moved to Sparks, Nevada. I caught up recently with Bill to see if I would win the bet I made with him that he would never be able to retire.

Sure enough, Bill tells me that in addition to working on his high performance cars, he spends time helping people from around the world that have known him from his long career with their high-end imaging needs.

Sparks, Nevada sounds pretty nice. Bill tells me that for the most part, the temperature is never above 90 degrees, never below 20 degrees and there is hardly any humidity. It seems to me like a dream come true, living in a beautiful climate, driving a high performance V8, and helping old friends locate the equipment they need.

Bill told me he had an extra bedroom so I think I might move out and join him.

The positive and negative of my COVID-19 testing experience Video

Recent headlines you should not miss Video