Ultrasound: The stethoscope of modern imaging 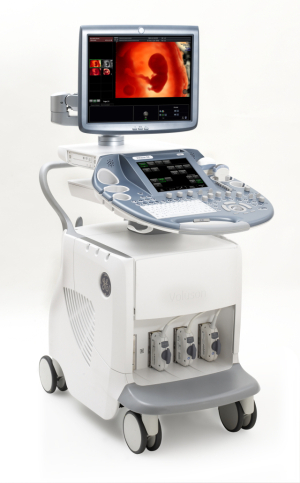 A patient visits her primary care physician. The doctor pulls out his stethoscope. He listens. But he can’t actually see anything. Primary care physicians have the tools of blind people – a big issue in health care right now, according to Paul Mullen, GE Healthcare’s chief marketing officer for ultrasound.

“The concept of a personal ultrasound device where it can give eyes to blind doctors is really an important thing to consider,” he says.

Although our “blind” physicians may have a long way to go, ultrasound has advanced in leaps and bounds in only a short time period. Over the past 15 years, Glenn Davis’ wife has given birth to five daughters in several different countries, including: Australia, England, Singapore and the United States.

“I have seen the evolution from what was originally a very granular type of image in ultrasound, in comparison to the current stunning ultrasound imagery available,” says Davis, VP of worldwide marketing and sales for ultrasound at Siemens Healthcare. “Today’s ultrasound enables you to see in three dimensions; you can see the face and profile and even rotate the image.”

Ultrasound is the fastest, strongest growing modality worldwide and there is no sign of it slowing down. Over the next few years, ultrasound will see continued growth in not only the traditional markets, but its utilization in radiology and cardiology will also continue to increase in the major markets of Europe, Asia and the U.S., according to Davis.

This year, ultrasound sales are predicted to surpass $4.8 billion and reach more than $6 billion by 2017 at an estimated CAGR of 5 percent, states a March report by Transparency Market Research. Meanwhile, the ultrasound market increased by 13 percent in 2011, with the majority of growth occurring in premium segments, explains Maher Elhihi, senior manager, market development for ultrasound at Toshiba America Medical Systems. New users account for much of this growth.

“One out of seven of the people who bought an ultrasound from GE last year wasn’t an ultrasound user ten years ago,” says Mullen. “They weren’t even in the ultrasound market; they weren’t a user; they didn’t think about it; they couldn’t even spell ‘ultrasound’. You’d have to look long and hard to find a similar sort of uptake in a business to business space.”

So where are these new users coming from? Mullen believes they are coming, in part, from new applications. “When I started in ultrasound, it was radiologists, cardiologists and OB/GYN,” he says. “Now it is rheumatologists, urologists, surgical guys, critical care doctors, ER doctors and the list goes on and on in terms of new users learning to apply ultrasound to their craft.”
1(current)
2
3
4
5
6

Read more stories from the May 2012 issue