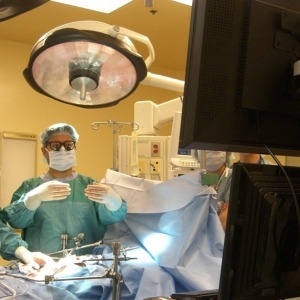 A doctor demonstrates
Kinect-controlled PACS
(Credit: GestSure)
On a recent spring day, the founder of a startup that could allow hands-free manipulation of PACS during surgeries said he was suffering from an unusual complaint: "mentor whiplash."

"You've just got so much information coming so quickly," Jamie Tremaine told DOTmed News by phone from Seattle.

Tremaine had been spending a busy week meeting with tech executives, as his group GestSure Technologies was one of nearly a dozen startups chosen by Microsoft to come to its Pacific Northwest headquarters as part of the Kinect Accelerator program. The three-month program, announced in April, aims to help fledgling companies learn from successful entrepreneur-mentors, acquire technical training and, eventually, meet with potential investors.

All the entrants have one thing in common: they all are businesses built on the back of Microsoft's Kinect, an accessory for the company's Xbox 360 video game console. The device, which has sold 19 million units since its November 2010 release, is in essence a depth-sensing camera, and can recognize arm and hand movements to allow hands-free control of video games.

Originally intended to be simply a peripheral to help Microsoft compete with the Nintendo Wii, popular with older, "non-traditional" gamers, the Kinect has arguably achieved a louder buzz for its non-gaming potential than its actual games; just this week, for instance, British inventors announced they will use the technology to help two tiny satellites dock in space. (Compare that cool development with a recent high-profile video game release, Star Wars Kinect, which muddles along with a lowly 56 score on Metacritic, a website popular with the gaming industry.)

Now with the Accelerator, Microsoft is looking to find more "killer apps" that can help the Kinect find a home in hospitals, schoolrooms and storefronts. For the program, Microsoft said it weeded through close to 500 applications, ultimately selecting 11 to be invited to join the accelerator. In addition to attending the mentoring and training workshops on Microsoft's campus, each participating company nets a $20,000 investment, courtesy of TechStars, a tech accelerator, which then acquires a 6 percent equity stake in the company. Perhaps most importantly, when the program wraps up, on "Demo Day," they get to try to impress visiting investors and studio heads to secure further funding.

The 11 startups have a range of ideas. One, Styku, is creating a program for online fashion retailers, where would-be buyers could scan their bodies at home with the Kinect, to get accurate measurements to ensure the clothes they purchase actually fit. Another, Freak'n Genius, lets users create animations using body movements, all tracked by the Kinect.
1(current)
2
3