CARE bill is on the Hill again 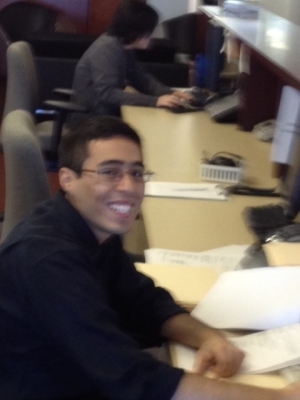 DOTmed intern and future RT Jose
Every summer we have interns. This summer we have three. One, Jose (pictured), is studying to be a radiologic technologist, and is enrolled in a two-year program. Next summer, instead of helping us out in the office, he'll be interning at a hospital radiology department.

I mention this because Brendon Nafziger, the editor of our online news, told me there was a hearing today on Capitol Hill about the CARE bill. This is legislation that would require radiographers, radiation therapists and other workers to meet minimum training requirements as a condition of Medicare reimbursement. Right now, as I understand it, this kind of thing is mostly handled at the state level, and not all states have certification requirements or specific standards.

Most industry groups back the bill. MITA (the Medical Imaging & Technology Alliance), for instance, the imaging equipment manufacturers group, released a statement today in support of CARE.

The bill has been around in one form or another for almost 10 years. It might pass this time, it might not, but I have the feeling that, no matter what, the field is going to be different for Jose and his fellow RT graduates than it was in the past.

Like young people in other professions, they will be entering a pretty tight job market. According to the American Society of Radiologic Technologists' most recent data from last fall, the vacancy rate for RTs stands at 2 percent, way down from 2003 when it was more than 10 percent.

Some RTs blame this on RT schools with class sizes that are too big, but the economy is probably not helping either.

Still, most graduates do find RT jobs, and I have no doubt that Jose will get one when the time comes. After all, the U.S. Bureau of Labor Statistics predicts the RT job market will enjoy above average growth over the next decade.

But I understand there must be a lot of uncertainty for those now starting out.