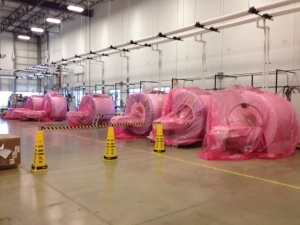 The Cryo-Farm at Siemens'
new faciilty supports 30 magnets.
On Wednesday, I flew to Chicago for the afternoon to experience the grand opening of Siemens Healthcare’s new facility in Wood Dale, Ill. The facility will be used to refurbish Siemens imaging systems for resale.

As I toured the 29,190 square-foot factory, which services customers in North and South America, I couldn’t help but think about the comparison I made years ago between refurbished imaging equipment and pre-owned BMWs.

Now, when customers trade in cars at the end of their lease, BMW inspects the vehicles, and selects the best of the bunch for resale as part of their Certified Pre-Owned program.

And BMW does this because they realize there is a big market in the U.S. for high-quality used cars.

Siemens has taken this process a step further, because the company is not just taking the best CT or MRI units on trade and reselling them, it's bringing them to a like-new condition. For a traded in medical system taken care of properly during its lifespan, Siemens deinstalls the machine, sanitizes it, reconditions it cosmetically, reconditions it mechanically, and then re-deploys it in the marketplace with a full warranty.

The facility, which took three months to put together, really was impressive. The space is shared with Hegele Logistic LLC, which is responsible for deinstallation, rigging, initial reinstallation and other refurbishing services for Siemens. The two companies have worked together for half a century, and they’ve had a relationship in health care since the 1980s.

Our tour was led by Rainer Mayer, the facility’s manager. We also heard a talk by Elisabeth Staudinger, CEO of refurbished systems with Siemens, who told us a very interesting fact: one in four CTs sold in the world, and one in five MRIs sold is refurbished.