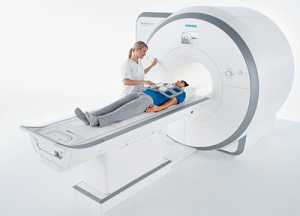 The scanner, called the Magnetom Spectra, is pitched as a high-end device with a lower total cost of ownership, according to Siemens' promotional materials. The device uses less energy than other 3T MRIs and the magnet-cooling helium doesn't need to be refilled as often, as it travels in a closed loop to prevent gas from escaping, Siemens said in its press release.

"The Magnetom Spectra developed by Siemens is an MRI scanner that will enable many radiologists to utilize 3-Tesla imaging for the first time," Dr. Axel McKenna-Küttner, a radiologist in Germany, whose clinic was evaluating the Magnetom Spectra, said in a statement in March, when the device was announced.

While the cost of the device was not disclosed in the release, the average price tag for a 3T MRI unit is about $2.4 million, according to a recent ECRI Institute report.

According to a product brochure, the Magnetom Spectra features 24 radiofrequency channels for up to 120 coil elements and a whole-body scan range of up to 205 centimeters. The coils are part of Siemens' fourth generation "Tim," or total imaging matrix, technology.