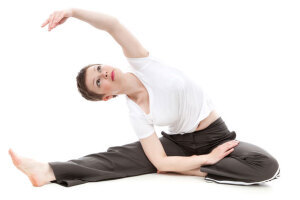 Stretching And Exercising by Petr Kratochvil1
Almost 16 million Americans practice yoga, an ancient Indian discipline for bringing peace to body and soul. But on very rare occasions the exercises can lead to injuries, mostly torn tendons, wounded knees and headaches, according to a first-of-its-kind study that used MRI, CT and other imaging modalities to document the bodily fallout of yoga over a nine-year-period.

In the study, published in the August issue of the American Journal of Roentgenology, the researchers analyzed almost 2.2 million imaging exams taken from January 2002 to January 2011 at the University of British Columbia in Vancouver. Modalities included MRI, ultrasound, CT and X-ray.

As might be expected, the word "yoga" was mostly a stranger to the radiology reports studied, occurring in only about one out of every 38,000 of them, according to the researchers, led by Thomas Le Corroller, with the university's radiology department.

Of the millions of exams studied, the investigators turned up only 38 patients with symptoms related to yoga. Of these, the authors found 23 injuries attributable to yoga in 20 patients.

Tendon lesions, such as a partly torn Achilles tendon, accounted for eight, or about one-third, of all injuries, while fibrocartilaginous tears, such as a torn meniscus, accounted for another third. Other one-off wounds included one case of hernia, a broken toe and slippage of a total hip replacement.

About one-fifth of patients complained of a headache, making it the most commonly reported symptom, although this invariably turned up nothing on the imaging exams, the authors said.

Good for what ails you

In general, though, yoga is noticeable more for potential benefits than minor musculoskeletal risks. For instance, the researchers said it placed fifth out of 39 in a recent ranking of alternative and complementary medicine techniques by perceived effectiveness. Also, closer to the researchers' radiological homes, a 2011 article published in the European Spine Journal found yoga practitioners had less degenerative disc disease on MRI scans than a control group.

But with the proliferation of for-profit studios, the researchers said it's still important for would-be yogis to understand the risks involved, however remote.

"The process of matching and individualizing yoga to each participant is quintessential to yoga and is recommended for yoga classes, but it is an even more significant aspect of yoga therapy," wrote the authors. "In the environment of burgeoning large yoga studios aimed at profit, the specific needs of the individual student are likely to be missed, and physicians should be aware of the potential for injury".
1(current)
2