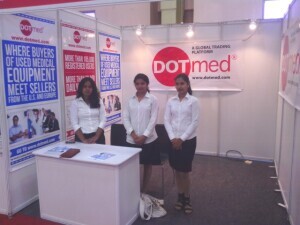 DOTmed Stand at Medicall
Some of you may have noticed that DOTmed is the U.S. media partner for the Medicall trade show that took place in Chennai, India last week.

We were represented there and more than 400 people stopped by our booth.

Generally speaking, I would say that business is up in India. There was some talk recently about proposed regulations having to do with restricting imports, but you would not know it by the atmosphere at the show.

You probably hear a lot of hype about BRIC countries, but based on our website traffic, there is much more business (in our industry) in India and Russia than in Brazil and China.

Although India has a lot of red tape, it is still an easier place to sell stuff than China which, in my opinion, is one of the most competitive markets anywhere in the world.

True, for North Americans, it is easiest to do business on our home turf, but India is a great market. I think Western Europeans realize this, as and there were a large number of people from Western Europe walking the floor at Medicall.

If you're wondering about Russia -- while it has its share of paperwork (and holidays), business people in Russia are extremely focused and they always get the job done.

One more thought about global markets. At DOTmed, we are noticing a lot more traffic from Eastern Europe and Western Asia than we've ever had in the past. For instance, I believe that Kazakhstan -- which, by the way, now holds a respectable 10th place in gold medals at the 2012 London Olympics -- is a very exciting up-and-coming market. Some people I know are already doing great business there.