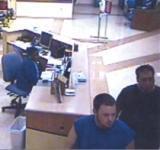 The suspects likely stole the film to melt it down for its silver content, the Virginia Beach police department said on a notice posted on its website, a problem they claim is on the rise both in the United States and in Canada. In fact, earlier this month a Toronto man was ordered to spend the next two months under house arrest after pleading guilty in March to stealing nearly 30,000 X-rays from an Ontario hospital, according to a CBC report.

In the Virginia case, police said the pair first tried to enter Sentara Virginia Beach General Hospital at 1:20 a.m., but were sent away for lacking proper ID. They returned later in the morning and apparently had a radiology staffer direct them to the film room after saying they were there to remove old X-rays, according to the police statement.

The police said the suspects, still at large, were a Hispanic male and a white male who had some knowledge of hospitals. They're believed to be driving a yellow Penske moving truck. A $1,000 reward has been offered for information leading to their arrest.