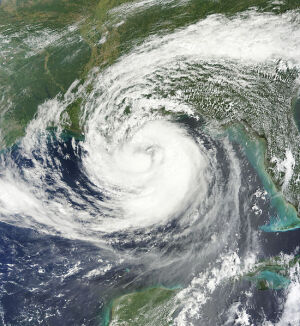 Satellite image of Isaac
on Aug. 28 (Credit: NASA)
When Hurricane Isaac made landfall two weeks ago in New Orleans nearly seven years to the day since Katrina struck, the Category 1 storm brought much devastation: possibly more than $1 billion in damages, at least nine U.S. deaths, power outages affecting hundreds of thousands, and flooding that drove thousands from their homes.

But the $14.5 billion-dollar levee system protecting New Orleans, rebuilt in the aftermath of Katrina, withstood the rains. And hospitals and health systems were better prepared than they were in 2005, when the costliest natural disaster in U.S. history damaged local hospitals and wiped out nearly 1 billion medical records, according to the American Health Information Management Association, a society for health IT professionals.

"There have been a lot of lessons learned since Katrina," said Julie Dooling, director of HIM solutions with AHIMA.

For one, many regional hospitals are better equipped to handle the widespread power losses that inevitably follow major disasters.

When Isaac slammed into southeastern Louisiana in the early evening on Aug. 29, after gathering strength along the Gulf, it unleashed storm surges that drenched the land and pummeled communities with 80 mile-per-hour sustained winds. As a result, the hurricane knocked out power in many towns -- and at all of the Ochsner Health System's facilities, according to Norris Yarbrough, assistant vice president of emergency preparedness at the New Orleans-based chain of hospitals and clinics.

However, Ochsner was able to power up all affected sites thanks to emergency generators, which are operated differently because of some post-Katrina innovations, Yarbrough said.

"We purchased several additional large KW generators, which we installed on flatbed trailers rather than going the more traditional route of permanently installing them on concrete pads," he told DOTmed News by e-mail. "This allowed us to shift the emergency power supply from campus to campus, depending on need."

He said in preparation for the storm, while hospitals and ERs remained open, clinics and health centers were shuttered early. All have since re-opened, he said, and were offering extended hours to help their communities recover.

Other preparedness strategies have also been put in place at Ochsner since 2005, Yarbrough said.

One is guaranteed fuel delivery. Yarbrough said the health system now has contracts that require suppliers to pre-position fuel trucks and drivers in locations where they would be able to refuel the centers and hospitals, if need be.
1(current)
2
3