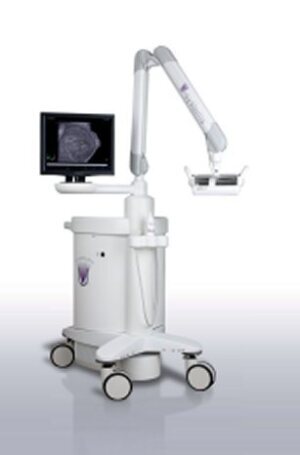 The somo-v ABUS (Credit: U-Systems)
The Food and Drug Administration for the first time approved an automated ultrasound device as an adjunct to mammography screening for women with dense breasts.

The decision, announced Tuesday, follows an April FDA advisory panel meeting which unanimously recommended approval for the device, called the somo-v Automated Breast Ultrasound System. The company that makes the device, Sunnyvale, Calif.-based U-Systems, also received an "approvable" letter from the agency in May, indicating likely approval once the company's manufacturing plants passed an audit.

The device, first cleared for diagnostic use in 2005, performs automatic scans of the breast in under one minute, the FDA said. It's already approved as a screening adjunct for women with dense breasts in Canada and European Union countries, U-Systems said.

About 40 percent of women undergoing screening have mammographically dense breasts, according to the National Cancer Institute. This means the breast tissue has less fat and more connective tissue, which appears white, like cancer, on a mammogram. For these women, cancers can be harder to spot on X-ray scans, the FDA said.

These women are also believed to be at higher risk for cancer. As a result, some doctors think MRI and ultrasounds should be used in addition to mammography to help radiologists find otherwise hidden tumors.

(However, it should be noted that a study published in an August edition of the Journal of the National Cancer Institute complicated the issue somewhat, finding that non-obese women with dense breasts are, surprisingly, not more likely to die of cancer, even if earlier studies suggest they are at greater risk for it.)

The FDA said approval for the device was based on a study where radiologists examined somo-v ABUS images and X-rays from 200 women with dense breasts and negative mammograms. The addition of the ultrasound images made it more likely the doctors would spot cancers than with the mammograms alone, the agency said.

"Mammography is an effective tool at finding breast cancer, but it doesn't work equally well in everyone," Dr. Rachel Brem, director of breast imaging at the George Washington University Hospital in Washington, D.C., said in a statement provided by U-Systems. "Recently completed studies demonstrated with the addition of ABUS we find about 30 percent more cancers in women who have normal mammogram, normal physical examination and dense breasts."

The somo-v ABUS is only approved for use in women who haven't had a previous surgery or biopsy, as clinical interventions could affect the ultrasound image, the FDA said. Also, U-Systems is required to provide training to users and information for setting up quality control measures.