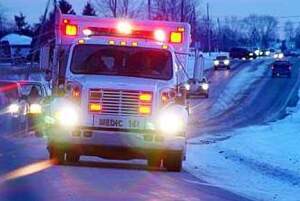 You're more likely to be struck dead by lightning than shot by a madman in a hospital, according to a 12-year study of hospital violence by Johns Hopkins University School of Medicine.

They also could be difficult to prevent, according to an analysis of more than 100 hospital shootings published Sept. 18 in the Annals of Emergency Medicine. The researchers, led by Dr. Gabor Kelen, found that most shootings involved a highly motivated killer typically bent on exacting revenge, committing suicide, euthanizing a sick relative or fleeing arrest.

"Impenetrable hospital security in an open society represents a particular challenge, and zero risk is not achievable," the authors wrote.

After trawling LexisNexis and public online databases, such as Google, the researchers turned up 154 shootings in 40 states between 2000 and 2011. These assaults left 235 dead or wounded, the researchers said. That works out to about 27 shootings per 1,000 U.S. hospitals. All told, 3 percent of U.S. hospitals had at least one shooting in the time period studied, according to the paper.

The shooters, who were overwhelmingly male, were the people most likely to die or be injured in the attacks, followed by patients. Hospital staff and physicians were "relatively infrequent victims," the authors said.

About 27 percent of shootings were driven by grudges, such as a 2001 case cited by the authors in which a Cleveland man fatally shot his estranged wife and wounded her ex-husband. Another 21 percent of shooters were trying to kill themselves, 17 percent wanted to kill an ill relative and 11 percent wanted to flee from custody. Nine percent of cases were chalked up to "social violence," and 4 percent to a mentally ill patient.

Nearly one-third of shootings took place in the emergency room, and in about one-fifth of these cases the shooter stole the gun from a security guard.

Next to the ER, the parking lot was the most popular site for shootings.

Although the ER was the most likely place for a shooting it was also, perhaps unsurprisingly, where people were least likely to die from their injuries. About 19 percent of ER victims died, compared with almost three-quarters of those shot elsewhere in the hospital, the researchers said.

After analyzing their data, the authors think that metal detectors would possibly have prevented a shooting in just about 36 percent of cases, with magnetometers seemingly most useful in hospital sites other than the ER, and least useful in the parking lot or other areas outside the facility.

Correction: Note, an earlier version of this article said 2 million killings; there are 2 million victims, not fatalities, of workplace violence in the U.S. every year. We regret the error.