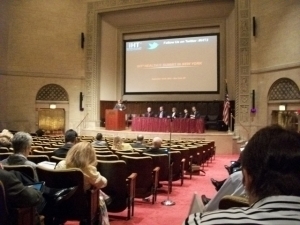 The iHT2 conference
was held at the historic New
York Academy of Medicine.
Dr. John Lumpkin, health care director of the Robert Wood Johnson Foundation, believes the problem with the U.S. health care system was outlined by cyberpunk novelist William Gibson in the early 1990s: the future's already here, it's just not evenly distributed.

In a keynote talk at the Institute for Health Technology Transformation conference in New York City last week, Lumpkin said that while the U.S. has the best medical science in the world -- cutting-edge imaging systems, near-miraculous surgeries and body-part replacements -- its health care system is plagued by waste and disparities of access.

That's why, while some are worried about the fate of the Affordable Care Act because of the coming U.S. presidential elections, Lumpkin said that pressures on the system mean change has to come no matter what.

"Regardless of what happens in 48 days in the election, the future of the Affordable Care Act and health reform...isn't going to sink," he said.

Plus, the U.S. health system gets little bang for its buck, spending a big chunk of its GDP on health despite achieving a middling rank on global health indices. And Lumpkin said U.S. failures here can't all be blamed on differences in lifestyle or diet. An August Health Affairs article, cited by Lumpkin, for instance, found America fell below the UK, Germany and France for mortality rates for conditions "amenable to health care interventions."

U.S. health care often offers spottier service as well. Lumpkin said in a poll of American adults, 23 percent said test results or records weren't available at the time of appointment, twice as high as in Germany and two and a half times higher than in the Netherlands.

As for the fate of the ACA itself, Lumpkin outlined four scenarios, depending on what goes down in the ballot box on Nov. 6:

One, Obama gets re-elected and the Democrats retain control of the Senate -- this is business as usual.

Two, Romney's elected but the GOP doesn't make headway in the upper chambers. "There will be budget manipulation but the bulk (of the ACC) will go through," he said.

Three, Romney takes the crown and the Republicans win a majority in the Senate, but fail to pull the 60 seats needed so they can vote cloture on bills and get legislation through. Still, through simple-majority budget votes they could possibly "defund major portions" of the ACA, Lumpkin said.

Four, Romney's elected, the GOP sweeps up 60 Senate seats and the ACA is repealed.
1(current)
2