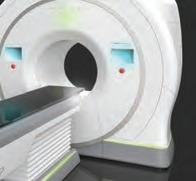 TomoTherapy HDA (Credit: Accuray)
Accuray Inc. unveiled the next generation of CyberKnife and TomoTherapy equipment at ASTRO 2012 in Boston this week, as promised by the company in an investor call in early October.

The Sunnyvale, Calif.-based company's newly appointed CEO Joshua Levine had revealed earlier this month it would have two major product releases at ASTRO that would be important for the business' future.

The two news lines of radiation therapy equipment to be released by the company will replace old models and have received new technology to allow faster treatment times and higher patient throughput, according to Stefan Gliessmann, vice president of product lifecycle management.

"For us it's a new era," he told DOTmed News by phone Wednesday. "Both our systems are becoming more flexible and more usable, and (we're) extending our reach."

Accuray pulled back the cover on the three models that make up its new CyberKnife M6 series, the FIM, FM and FI, all of which are pending clearance by the Food and Drug Administration.

The CyberKnife, the first iteration of which was released in the 1990s, is a stereotactic radiosurgery and radiation therapy system using a robotic arm to direct X-ray beams to treat cancer.

The biggest innovation in the new series is its highest-tier model, the FIM, and the mid-tier FM, include the addition of the Incise Multileaf Collimator. This allows for a bigger aperture for better coverage of larger lesions, such as in the liver, for stereotactic body radiation therapy, an indication of the device.

Research carried out at Fox Chase Cancer Center in Philadelphia suggests theoretical time savings for the MLC of 35 to 70 percent compared with earlier models, Gliessmann said.

The MLC, however, is pretty hefty, weighing in at close to 220 pounds, just shy of the average weight of an NFL linebacker. So Accuray said it had to replace the CyberKnife's robotics to accommodate the extra pounds. The new robotics can bear a 661-pound payload, largely so it can handle moving around with the heavy collimator if in the future Accuray releases dynamic delivery applications, Gliessmann said. As a result of its greater weight, though, the MLC is not available as an upgrade for older models, he added.
1(current)
2
3