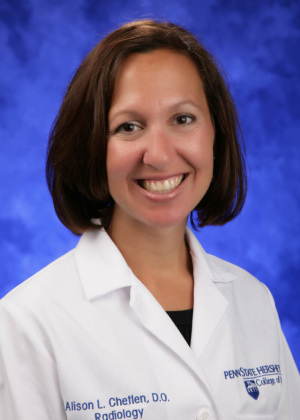 Dr. Alison Chetlen (Credit: RSNA)
Scatter radiation from mammograms exposes the thyroid and other organs to a miniscule dose of radiation, dwarfed by everyday exposure from cosmic rays and other natural sources, according to a new study.

At RSNA 2012 in Chicago last week, researchers said the amount of X-ray radiation absorbed by the thyroid, salivary glands, the uterus and other exposed organs was less than 2 percent of the total annual background radiation.

Lead author Dr. Alison Chetlen, from PennState Hershey in Hershey, Pa., said she did the study because women had been asking her whether they should wear leaded thyroid guards when getting a mammogram because they were afraid the radiation from the scan could up their risk for thyroid cancer.

"After a daytime talk show aired, we had a lot of women very nervous about it," she told reporters at a press conference last week.

While she didn't name the show, a 2010 of syndicated health program "Dr. Oz" apparently warned women about the thyroid danger from mammograms. The show was criticized by the American College of Radiology.

Chetlen said her study shows the risk of cancer to these organs during the scan was so small it was "indistinguishable" from cancer risks from other sources.

She said thyroid guards can also reduce image quality and create artifacts on the X-ray that could require women to go in for a repeat scan.

For the study, Chetlen and her colleagues taped six penny-sized dosimeters to the skin around the neck, face and chest of 207 volunteers to measure absorbed skin dose during two-view mammography. Next, they calculated the doses organs would receive based on the entrance skin dose.

She said the average thyroid and salivary gland doses were estimated at around 0.05 milligrays. By comparison, average annual radiation exposure from natural sources is around 3 millisieverts a year, she said. (She said for the purposes of the study the two measures are equivalent.) Excluding the sternum, all doses were below 2 percent of the natural background rate, she said.