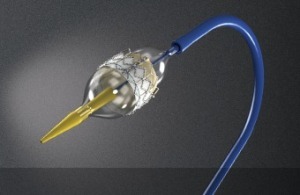 TAVR from Edwards.
The company used CED to align
FDA and CMS requirements
Updated guidance from the Centers for Medicare and Medicaid Services will place more emphasis on a policy to collect evidence on a medical device's effectiveness.

Coverage with Evidence Development, or CED, has been around since 2006 as a way for CMS to perform additional testing after a medical device has been approved by the Food and Drug Administration, in order to determine if the technology is beneficial for patients in a clinical environment and if so, if Medicare should cover it.

However, CMS has hardly entertained the policy. The 2006 document actually states that CMS should use CED "infrequently". An analysis by Avalere Health, a health care consulting firm, found that CMS used CED only 13 times since 2006, and that roughly 20 percent of the national coverage determination (NCD) processes ended in CED.

But this is expected to change. In the new guidelines released Nov. 29, CMS removed the clause which asked the agency to use CED rarely, and got rid of another statement that restricted CED to the NCD process. The updated guidance also gives the Agency for Healthcare Research and Quality (AHRQ), part of the U.S. Department of Health and Human Services, a prominent role implementing CED. According to Reginald Williams, vice president of evidence-based medicine at Avalere, this is one provision in the new guidelines that stood out for the impact it will have on medical device manufacturers.

"It won't be sufficient to just focus on FDA or facilities and providers anymore," Williams told DOTmed News. "If I'm a manufacturer with a product coming out, or one that is seeking a new indication for its use, I think CMS has to be on your radar screen. I think that security blanket of Medicare default coverage may not be there anymore."

In the guidance, CMS lays out clear criteria for applying CED, for instance, when there is limited evidence on how a device works in the Medicare population and if it has benefit in the clinical day-to-day setting.

According to Williams, this is a clear indication that CMS has a research agenda. CED is known as a difficult policy to implement — especially for an agency that is focused on health insurance and less on research. The new guidelines are a way for CMS to try to get past the obstacles of CED and align more with health care reform, he said.

Just like the FDA approval process for a medical device, decision making for CED is lengthy as well. CMS can take anywhere from 9-12 months just to decide if it will consider a product for coverage. Even then, if Medicare makes the decision to go through with CED there's a lag between then and when Medicare beneficiaries have access to the technology, through either a clinical study or a registry.
1(current)
2