A scanner that could save your skin 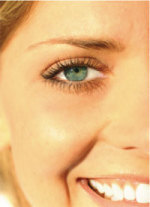 Use the Clarity Pro Scanner to
identify bacteria-clogging pores
As reported by Donna Fuscaldo, Dow Jones Newswire and reprinted in the StarTelegram.com.

BrighTex, a San Jose, Calif.-based start-up, hopes to create a cheaper version for home use. Someday, the company even envisions its technology being built into cellphones or laptops so consumers can get an analysis of their skin on the go.

There are other products on the market that show where sun damage has occurred, but Rajeshwar Chhibber, founder and chief executive of BrighTex, says nothing available today can provide the amount of detail Clarity Pro does.

"We have developed algorithms which can recognize features and shapes and the significance of things before something develops fully," says Chhibber. "When it's in the 5 percent stage, we can tell what it will turn into." That means the product can tell if a wrinkle just starting to form will turn into a deep wrinkle or a fine line.

After taking a white light and UV image of a person's face, that image is entered into a software program to detect damage. In the case of clogged pores, Clarity Pro can identify what type of bacteria is in the pores and predict where acne will form.

For sun damage, the facial scanner can tell how much damage is under the skin, how long a person can stay in sun before the skin is damaged more and forecast the chances of a person getting skin cancer due to harmful UV rays.

Chhibber, who founded the company in January 2005, comes from a semiconductor background and said the leap from detecting defects in wafers to defects in faces wasn't that big. "To me inspecting a face or a wafer is very similar," he says, since in both cases you have to look for the tiniest of defects.

Clarity Pro can also be used to monitor the progress of a particular facial cream to see if it is reducing wrinkles or improving sun damage. For the cosmetics field, Chhibber says a future product will be targeted toward research and development departments and may result in better creams and lotions.

"The cosmetic industry is waiting for something like this but nobody came forward," says Chhibber.
1(current)
2