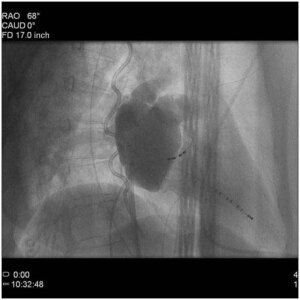 3D rotational scan capture image
(Courtesy Philips Healthcare)
Philips Healthcare unveiled an improved version of its 3D rotational guidance for treating cardiac arrhythmia that the company said could be used in place of MR and CT scans that are often required beforehand for such procedures.

"The gold standard is the pre-procedural CT or MR scan but we can confirm now that this is a really good alternative because the workflow is much simpler now," Marcel de Groot, electrophysiology segment leader for interventional X-ray at Philips Healthcare, told DOTmed News.

When treating arrhythmias of the heart, electrophysiologists are normally up against the challenge of accurately navigating the catheter into the patient's heart — 2D fluoroscopy gives a good picture of the catheter, but less accurate depiction of the heart structure, specifically the left atrium in this case. CT or MR scans of the patient's anatomy are normally taken before the procedure so that doctors can know more about the space they will be navigating through.

While 3D rotational angiography is not all that new, Philips has tried to address many of the challenges that have caused electrophysiologists to shy away from the technology.

"With this latest step for the EP navigator 4 we've really simplified the workflow to make it easier for the doctor to do the procedure while at the same time delivering optimal image quality," said de Groot.

In the past, the procedure was especially difficult to perform on large patients or on patients under general anesthesia. New updates to the EP navigator system, which were unveiled at this year's Boston Atrial Fibrillation Symposium, reduce the range of the rotation so that the shoulder — which is larger when dealing with obese patients — doesn't get in the way. It uses a shortened trajectory of 159 degrees versus 240 degrees for the traditional scan. The new technology also simplifies rotational angiography when a patient is sedated, providing easy access to the anesthesia equipment.

"It sounds like small details but in the end this is why in the past doctors often gave up after trying this technology," said de Groot.

If adopted, a technology like this can aid in understanding the anatomy, navigating the catheters, avoiding complications and improving overall outcomes, according to de Groot.

In addition, the optimized 3D rotational scan requires less radiation exposure to capture the 3D image, according to a statement from Philips.

"By using the EP navigator with 3D rotational scan, my patients and team gain several benefits," said Dr. Vivek Reddy, Boston AF course co-director, and director of the Cardiac Arrhythmia Service at The Mount Sinai Medical Center, in the statement. "Firstly, rotational angiography is getting better and better, to the point where we don't have any issues in getting good quality pictures, so it allows us to optimize workflow. I can now take a rotational image, make a 3D rendering of it and project it on to the X-ray, so that as we manipulate the catheters on X-ray, the shadows tell us where the catheter is relative to the left atrium."

Philips also announced that they will be working with Biosense Webster to help doctors treat more complicated cases of arrhythmias where it's necessary to use both X-ray imaging and mapping systems that require a doctor to visually combine images.

"We will exchange the information in those two systems and make combined images out of them to help the physician," said de Groot.