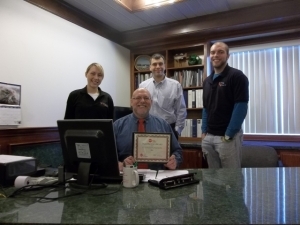 Bob Gaw with his team
Bob Gaw, the owner of PRN, which sells new, used, and reconditioned medical equipment, is a DOTmed User that has the distinction of receiving a grand total of over 191 number of positive ratings on DOTmed. PRN was also the number one company last year with the most ratings.

I called Bob on the phone the other day about another matter and while we were talking, he reminded me why I like the people in our business.

Bob is a real down to earth fellow who is interested in helping his customers. He has a great sense of humor and does not take himself too seriously but does take his commitment to his customers seriously.

I know he considers himself lucky to have so many of his family members working with him and I know they are all just as serious about customer service as he is.

Bob and his company, PRN, is one of the reasons why DOTmed is still around today because if there were not people like Bob, there would not be a DOTmed.

Congratulations, Bob, on another year in the DOTmed 100!

In the photo, you'll see a Bob holding up the DOTmed 100 award, surrounded by "Team Gaw." From right to left: Megan, PRN buyer and in her final year of grad school at Boston University; Robert M., vice president of sales and new business development, UMass grad and recently inducted with his football team into Umass/Dartmouth athletic Hall of Fame; and Kyle, web sales and recent grad of Suffolk University.