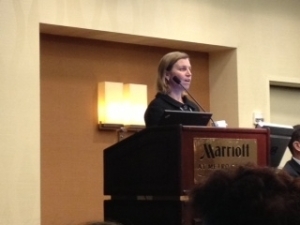 Dr. Jennifer Malin,
medical director of oncology at Wellpoint
speaking at a proton therapy event
Riding on the heels of President Obama's economic-themed state of the union address Tuesday night, a panel on "the economics of proton beam therapy" aptly began the second day of events at the National Proton Conference held in Washington, D.C. earlier this week. The event was organized by the National Association of Proton Therapy.

Reimbursement, payment and insurance coverage — topics that would normally put a crowd to sleep — seemed to draw the most attention from proton industry stakeholders and interested parties in attendance.

Proton beam therapy is an advanced form of cancer therapy that's able to directly target tumors more precisely, but it is also associated with a high price tag. The cost of building and equipping a facility can reach upward of $100 million.

For the most part, Medicare pays for treating prostate cancer with proton beam therapy. In fact, a recent Agency for Healthcare Research and Quality (AHRQ) report, which examined growth in proton therapy for Medicare beneficiaries between 2006 and 2009, found that prostate cancer accounted for 73 percent of the cases reimbursed by Medicare in 2009. The average reimbursement was approximately $25,000.

According to Dr. Michael Kolodziej, national medical director for oncology solutions at Aetna, some private insurers — like Aetna — are willing to cover proton beam therapy for prostate cancer patients as well.

But most health insurance policy makers seemed wary about paying for an expensive treatment that lacks the evidence they feel warrants coverage.

"The question is, if it's more money, does it improve outcomes?" said Dr. Jennifer Malin, medical director of oncology at Wellpoint, during the panel discussion. Malin would like to see more randomized controlled trials and meta-analysis data — the highest standard for evidence gathering — for proton beam therapy.

Besides prostate cancer, proton beam therapy is also used in many pediatric cancer cases. It's been shown to be effective in treating these types of tumors because of its ability to spare healthy and growing tissue nearby. Treating tumors in the brain, lungs and neck are also being explored with proton beam therapy treatment.

While there are more studies underway now than ever because more proton centers are cropping up around the country, most of the evidence to date has focused on either small, short-term studies or quality of life surveys.
1(current)
2