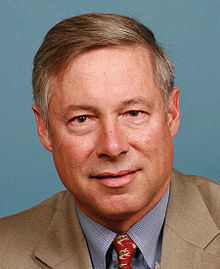 Fred Upton (R-Mich.)
Republicans on the House Energy and Commerce Committee, including chairman Fred Upton (R-Mich.), wrote to U.S. Food and Drug Commissioner Dr. Margaret Hamburg on March 1st asking her to clarify the uncertainly surrounding regulating mobile medical applications — a rapidly growing market. GOP lawmakers are concerned that smartphones, tablets and apps will be regulated as medical devices and therefore manufacturers will be subject to the excise tax under President Obama's health care law.

In July 2011, the FDA released draft guidance on how it intends to regulate those applications. The FDA has the authority under the Food Drug and Cosmetic Act to regulate certain products that meet the definition of a medical device, and applications more or less have the ability to turn mobile platforms into medical devices. In the draft, the FDA stated that they would likely regulate medical mobile apps that transform a device into a regulated medical device. However, they did explain that the manufacturer would not be considered a medical device maker unless they were marketing the product as being intended for medical users.

Although the FDA is focused on 'intended use,' authors of the letter stated that they are "concerned about the potential of 'actual use' becoming a factor in the future."

They give the example of draft guidance issued by the FDA last year concerning commercially distributed in vitro diagnostic products. In this instance, the FDA indicated that 'actual use' would be a factor in their analysis of 'intended use.'

"If FDA determines that certain smartphone, tablet, or mobile medical apps are devices for the purposes of the FDCA [Food Drug and Cosmetic Act], it raises the possibility that they would also be subject to new taxes under the PPCA," stated the letter.

A 2.3 percent excise tax to medical device manufacturers was included in the Affordable Care Act to help raise roughly $30 billion over 10 years to offset the cost of the law.

In addition to clarification, the letter also asked the FDA to provide an update on when final guidance will be released. The FDA has been gathering public comments on the draft guidance since it was released in July 2011.