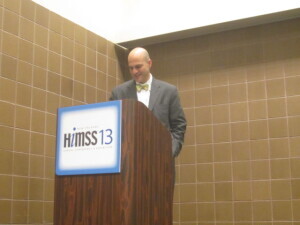 Farzad Mostashari
at a HIMSS13 media briefing.
Dr. Farzad Mostashari, the National Coordinator for Health Information Technology, touched on an earlier announcement from HHS and responded to questions on the impact of sequestration on his department at a press briefing during HIMSS13 on March 6. He also commented on a recent study that showed disappointing returns for physicians on EHR investments.

The announcement also promised to increase emphasis on sharing information between providers.

"We want to unequivocally state our intent that we will use levers for data sharing over data hoarding," Mostashari said during the media briefing.

HHS released a request for information (RFI) seeking input on the best ways to approach the challenge of seamless data exchange.

"We want your help," he said. "We want your ideas about what are some of the perverse incentives that may in fact be hindering information sharing. [We're] recognizing that technology alone is not going to be sufficient to receive the kind of connected care that our patients deserve."

A recent study in the journal Health Affairs found that most physicians lost money five years after EHR adoption. When asked about the study during the briefing, Mostashari pointed out that the study did not reflect real-world experiences, as the physicians in the study were given unlimited resources for building an EHR program.

"The practices had no price sensitivity, they were told we'll cover everything," he said. "In fact providers in the real world are quite price sensitive."

He said that while in the study, costs were around $150,000 per physician, in reality no facility would spend that much. He said there was some valuable information that could be learned from the study, such as what workflows functioned best and where cost savings were actually found.

Impact of sequestration on EHR programs

Mostashari acknowledged that the 2 percent cut to Medicare reimbursements under sequestration could lead hospitals that participate in the Medicare portion of the EHR inventive program to lose thousands of dollars. "This sequester is going to hurt," he said.

He also said his department will suffer a $3 million budget cut, from $60 million to $57 million.

"Absent a furlough in our hard-working staff, it's going to mean we have a major cut in the contracts that we have," he said. "There's going to be things that the industry expects us to do that providers and patients expect us to do that we simply will not be able to do."

With a laugh, he apologized for ending the briefing on a low note.