Dense breast dilemma: Should we add ultrasound to mammography? 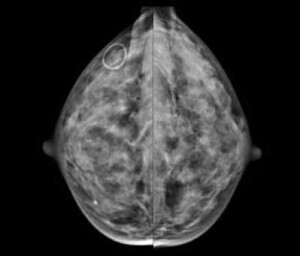 An extreme case of breast density
(Credit: RSNA)
As evidenced by a lively panel discussion on March 8 at the European Congress of Radiology in Vienna, breast density is the subject of much of the same controversy in Europe as it is currently in the U.S.

Two experts — one from Pennsylvania and the other from Italy — aimed to bring some clarity to the subject as supplemental screenings, like ultrasound, are being considered in conjunction with mammography to detect lesions in women with dense breasts.

But before methods could be discussed, experts agreed that a consensus must be established first within the medical community on what constitutes density. While many vendors have recently developed quantitative software to measure breast density, panelist Dr. Wendie Berg, professor of radiology at the University of Pittsburgh, said that density is determined for the most part right now by mammography, and that there is often disagreement on how doctors should categorize dense breast tissue.

"There's such variability in measuring density and then implementing changes in the protocol," he said. "It's not an easy task."

On a mammogram, dense breasts have less fat and more connective tissue, which appear white on the mammogram, just like cancer, possibly making it easy for radiologists to miss.

Berg said that roughly half of women under age 50 have dense breasts (breast density is said to decrease after menopause). She said dense tissue is a risk factor for developing cancer in women, and also a risk doctors take trying to best detect it.

"It's a double whammy for women," said Berg.

Berg has been a strong advocate for adding ultrasound to mammography screening for some time, and she presented an extensive review of several studies that have been conducted over the years, encompassing over 64,000 examinations, showing the supplemental cancer detection rate of ultrasound. One of the main studies, called the American College of Radiology Imaging Network's 6666 Breast Cancer Study, which she was lead author on, showed ultrasound with mammography found an additional 1.1 to 7.2 cancers per 1000 high-risk women with dense breast tissue.

While the jury is still out on breast density being connected to a higher rate of death from cancer, Berg also reviewed the evidence during her lecture that points to a high risk of cancer in relation to how dense a woman's breast tissue is.
1(current)
2
3