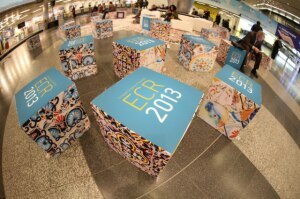 Some of you might remember that Hologic purchased R2. R2 made a computer aided detection workstation for mammography and because they were independent, their product was used on many different manufacturers.

However, Hologic bought the company and it is my prediction that there is an opportunity for another company to manufacture a product that might be used as an add-on to mammo systems.

While I was at ECR, I thought I would do a little investigating and I came across Jeffrey Wehnes, the CEO of VuCOMP, Inc.

Jeff explained that VuCOMP's technological approach is based upon conceptual pattern recognition as opposed to the more conventional learn-by-example technologies used in the past.

I am no rocket scientist but it sounded pretty convincing at the time.

I met two salespeople while I was at there, Ms. Kelly and Mr. Rosene. I have never met them before but when we got talking, they had impressive pedigrees and it always makes me feel good about a company when the sales staff has a background of success.

I think VuCOMP is a company to watch. We will see how right I am a year from now.