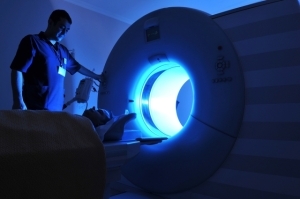 Ten years from now, a new kind of MRI scan might need only a few minutes to cover the entire body and catch diseases like cancer in their earliest stages. Researchers at Case Western Reserve University call the method magnetic resonance fingerprinting (MRF), and they say it will change everything about scans and what kind of information they can reveal.

Rather than creating an anatomical image, as today's MRI scans do, MRF would collect a wider range of signals. Those signals would be run through pattern recognition programs similar to facial recognition software to reveal if tissue is diseased, and if so, by what.

To do this, researchers said they had to put aside everything they knew about traditional MRI.

Once the diseased tissue's "fingerprint" is determined, clinicians can then use that information to learn about the disease and its progress.

The scans may look different, but Gulani said the MRI scanners themselves will likely be the same. However, he said changes would need to be made on the image acquisition and reconstruction side. They also foresee different ways of visualizing the results.

The research team had been tackling the problem of quantifying MRI data for more than a decade before one of Gulani's colleagues had a "flash of genius," he said.

"We started with the question I [asked] as a clinician when I look at an image: the signal intensity in that image is not really a meaningful number and this really bothers me," he said. "We couldn't get it to be efficient enough. Then about three years ago, Mark [Griswold] came in with the idea of fingerprinting."

Gulani hopes MRF will be able to reveal major diseases within the next few years. In the meantime, he said the team will map more signal parameters and determine tissue signatures. After that, they'll work on showing MRF's utility in clinical patients.

"I would love to see, down the road, a disease signature map of disease probability," said Gulani. "We're at step one, but I'd love to see that in 10 years."