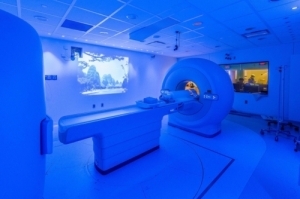 The PET/MRI from Philips.
Texas Children's Hospital has become the first children's hospital to install a PET/MRI scanner, the hospital announced on April 29. The equipment, manufactured by Philips Healthcare, will be used in clinical trials to investigate efficacy for children's cancer screening and other uses.

PET/MRI, a new technology with just a few installs in academic centers around the U.S. and Europe, has been FDA approved only for adult use. The first order of business at Texas Children's will be simply proving its clinical effectiveness in children.

Potential benefits include an up to 40 percent reduction in radiation dose compared with PET/CT.

"Children are more susceptible to risks of radiation, and they have an increased risk of developing cancer because they might have 80 more years to live," said Dr. Victor Seghers, chief of nuclear radiology at Texas Children's, to DOTmed News. "So the radiation dose savings is particularly helpful in the pediatric population."

Another benefit is that MRI is better than CT at imaging some parts of the body, such as the brain, liver and bone marrow, Seghers said.

Clinical trials with the equipment will also investigate additional ways PET/MRI can offer an edge over PET/CT.

"Whenever we do a PET/CT scan, all we were using the CT scan for is to localize where in the body that PET data is coming from," said Seghers. "MRI gives the same anatomical location, but it gives additional characterization of the tumor."

Besides dose reduction, hybrid modalities like PET/MRI can bring cost savings to facilities, another reason Texas Children's decided to take on the new modality, Seghers said.

The scanner will be located in the new imaging facility on the 5th floor of Texas Children's Pavilion for Women that opened on April 29.