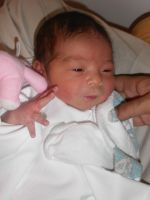 Omegaven prevents accumulation of fat
As reported on Ivanhoe Newswire:
A tiny baby boy faces certain death. Born with his intestines outside of his body, surgeons had to remove all but a small portion of his bowel. The only way he could eat was through an IV. But, like many children who must be fed though an IV, his liver began to fail. A transplant could save his life, but he was so small that the chance of finding the right donor was slim.

This is the situation parents and doctors face all over the country. Many children who must rely on intravenous feeding tubes because of intestinal failure find there are more problems in store for them. Long- term parenteral nutrition (PN) can cause life-threatening liver disease -- especially in infants.

In 2001, researchers at Children's Hospital Boston theorized that the fat given in standard PN solutions, called Intralipid, was contributing to liver disease by causing fat to build up in the liver. This solution is high in Omega-6 fatty acids -- known to have an inflammatory effect. Researchers tested Omegaven -- a different fat mixture, comprised of Omega-3 fatty acids, in mice. Omega-3 fatty acids have been shown to prevent accumulation of fat and have anti-inflammatory properties.

The results were so encouraging that, years later, Rusty Jennings, M.D., director of the Children's Advanced Fetal Care Center at Children's Hospital Boston, asked for special permission to give Omegaven to the tiny baby boy with a failing liver. His liver improved so much that he was taken off the transplant list.

So far, 21 patients at Children's Hospital Boston have received Omegaven as the fat portion of their PN. Two of the patients died of unrelated causes, the others have done well, according to representatives of the hospital.

This article was reported by Ivanhoe.com.