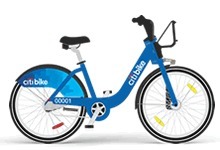 Courtesy of Citi Bike
About three weeks ago, New York City and Citibank launched a program for people to share bikes -- much like they do in Amsterdam, Paris, London and many other cities. For a reasonable fee, you can rent a bike from one of the many stations around the city and then return it to any station you're nearby.

I signed up so that I would be able to participate. I normally walk to work, which takes me 30 minutes, but on a Citi Bike it only takes me 9 minutes.

I notice that when young girls see this old geezer in a suit riding a bike down Broadway, they smile, which is an added benefit. But the real benefit is that it saves me time and it's healthy.

I heard an alarming statistic the other day. According to a new report from the New York City Department of Health, every 90 minutes a New Yorker dies of a diabetes-related illness. City Health Commission Dr. Thomas Farley said that more people than ever are dying of diabetes-related causes in New York City.

Our mayor, Michael Bloomberg, has instituted a number of policies that not everyone likes. For those of you outside New York City, you probably know that he's against regular people having handguns. But he's also forced certain chain restaurants to list calories on their menus, banned smoking in public parks and beaches, and restricted the sale of soda drinks more than 16 ounces (that proposal has since been rejected by a New York Supreme Court judge). Now, Bloomberg is backing the bike sharing program with over 330 docking stations in Manhattan and Brooklyn and more on the way.

There are two other people at DOTmed who ride bikes much longer distances than I do. I know if I wasn't the president, they'd be making fun of me because I'm not a real cyclist. But you have to start somewhere.