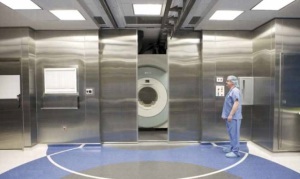 For radiologists, image quality is everything. When Emanuel Kanal, a Pittsburgh radiologist, first noticed a thin line cutting through his otherwise clear images, he was immediately concerned. Soon, random streaks that looked like rain dripping down a window appeared on his images. As a consultant to the FDA on MR safety issues, it didn’t take long for him to figure out the image-spoiling culprit: a compromised RF shield.

“The adhesive that we had used for our shielding in the wall was failing,” he says. “At that point, we had to replace the shield and it was a massive undertaking.”

RF shields can dutifully protect MRI scanners from radio frequency for upwards of two decades, but even a small puncture in a shield or a slight installation mistake can mean tainted images and a major headache for the imaging facility.

From materials to testing down the road, there are a number of decisions you’ll need to make to maximize a shield’s life. To help you make those important decisions, shielding experts shared their best advice based on their experiences.

Besides price, another factor that can impact material choice is whether the site requires protection from electromagnetic interference in addition to RF shielding. MRI manufacturers generally perform a test to measure EMI levels when evaluating a site.

“If you have EMI issues generated by power lines, transformers or electrical systems, you may want to put in a galvanized shield, and you may want to do shields of different thickness,” says Joel Kellogg, product line manager at shielding company ETSLindgren. “For example, if someone puts in an eighth inch of galvanized steel and an eighth inch of aluminum, they’re going to get some additional shielding benefit for EMI, which in most applications isn’t required, but it could help make a site acceptable to the magnet vendor.”

“People don’t want to hear the MRI outside of the room, so they’re adding acoustic doors and acoustic materials,” says Howard Newman, vice president of Universal Shielding Corp. While choosing materials can be a challenge, selecting a vendor shouldn’t be. Bill Mansfield, owner of Professional Installations and an RF shield tester, says that shielding companies have become much more reliable over the last 10 years. Still it pays to research who you’re working with to get the most for your money.
1(current)
2
3