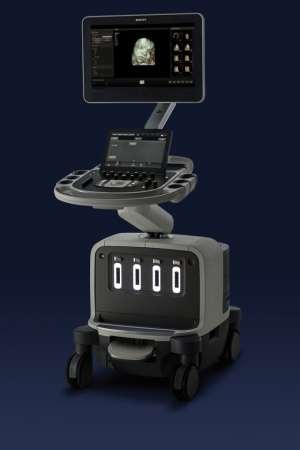 Philips new ultrasound is being marketed for cardiology, radiology and OBGYN. While all three segments need this type of new beam forming technology to get penetration in the difficult patients, EPIQ might have the most clinical benefits in the cardiology space.

In echocardiography, ultrasound is the imaging modality of choice for looking at heart failure and valvular disease.

"You can use other modalities like nuclear medicine techniques, but ultrasound is commonly used because it's portable, it has no radiation and it's good at looking at chamber size and volume," said Salgo.

Clinicians are increasingly interested in having an ultrasound technology that gives them the ability to do what's called speckle tracking. According to Salgo, EPIQ has a tool where, without clicking around, the user can zero in on the region of interest to get the global longitudinal strain, which is a sensitive marker for looking at morbidity and mortality.

"The idea is to make it fast and more reproducible. Doctors are being asked to do more and see more patients, and they don't want to compromise the quality of the results," said Salgo.