ASTRO 2013: Research focuses on quality of life after cancer 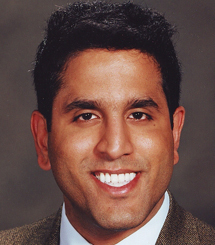 Dr. Vainai Gondi
of the Cadence Health Brain Tumor Center
Now that wars on cancer result in fewer casualties, radiation oncologists are taking a second look at patients post-battlefield to examine quality of life after the final fraction. Studies presented at ASTRO 2013 showed in what cases less radiation or hormone therapy is better than more, how to preserve memory after brain tumor treatment and where mental health fits into cancer treatment.

One study from the Cadence Health Brain Tumor Center looked at how sparing a key part of the brain connected to memory reduces radiation therapy's ill effects on recall. Research has shown that radiotherapy prevents neural stem cells in the hippocampus from creating new neurons, leading to relatively mild but impactful declines in recall.

"A good way to describe it is if you were to go to a grocery store with five things to remember, and you can remember all of them, but in four to six months you may remember only two or three of them," said Dr. Vainai Gondi, the study leader and co-director of the Cadence Health Brain Tumor Center, during a press event.

Instead of using whole brain radiation therapy, the study trained radiation oncologists to deliver IMRT to the brain while sparing the hippocampus. With that technique, the 42 patients in the study experienced a 7 percent decline in a recall test, compared with the 30 percent decline measured in the historical control group at four months. After six months, the 29 analyzable patients had a 2 percent decline in recall.

An initial study found that increased radiation led to higher mortality, a counterintuitive finding that researchers chose to further explore in a new study by looking at QOL data. Researchers concluded that the QOL reports gave the "other side of the story," suggesting that the patients' decreased quality of life reports should have been a sign that the treatments were not working properly.
1(current)
2